Channel surfing and drinking beer fit together like a hand in glove (as long as you aren’t on trial for murder in LA) and a recent weeknight was no exception. Rather than having a beer in my hand, my favorite brew was on the tube (do you say that with a flat screen, but I digress) in the form of History Channel’s Modern Marvels episode on brewing. Originally airing on 16 November 2005, the episode covers a wide range of topics in the history of our frequent beverage of choice from its archaeological record to the modern process of brewing. I have tried brew created by Dogfish Head Brewery in Lewes, DE, derived from an ancient Chinese recipe, but that is for another post.

What strikes me most in this program is the relationship between beer and science. Fermentation has had a profound impact on our global society. Defined as “any of many anaerobic biochemical reactions in which an enzyme (or several enzymes produced by a microorganism) catalyzes the conversion of one substance into another; especially the conversion (using yeast) of sugars to alcohol or acetic acid with the evolution of carbon dioxide,”[1] it is the basic scientific process that generates many of the foods we associate with everyday and celebratory menus.

So, in recognition of the role of science in our discussion of brewing and beer, Jolly Good Fellows is introducing our section, “To the Lab!” where we will be discussing the relationship between beer and science, the science of brewing, some brewing techniques and anything else that comes to mind when you mention “beer” and “science” in the same breath.

Now you might think that our poster child for this series of posts might be Louis Pasteur, whose application of heat to beer made our favorite beverage safer to drink and easier to distribute worldwide. But with all due respects to Messier Pasteur, and in keeping with the more light hearted character of our discussions, we’ve elected to go with two less distinguished, but imminently more recognizable scientists.

So, without further adieu – To the Lab! 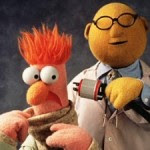