What is the number one craft brewery in the United States?  Among the macro-level breweries, this question is pretty simple: InBev (who brews Budweiser, Bud Lights, amongst several others). Until this week when the Brewers Association published the 50 craft breweries for 2014 - and the number one was Yuengling Brewery of Pottsville, PA. 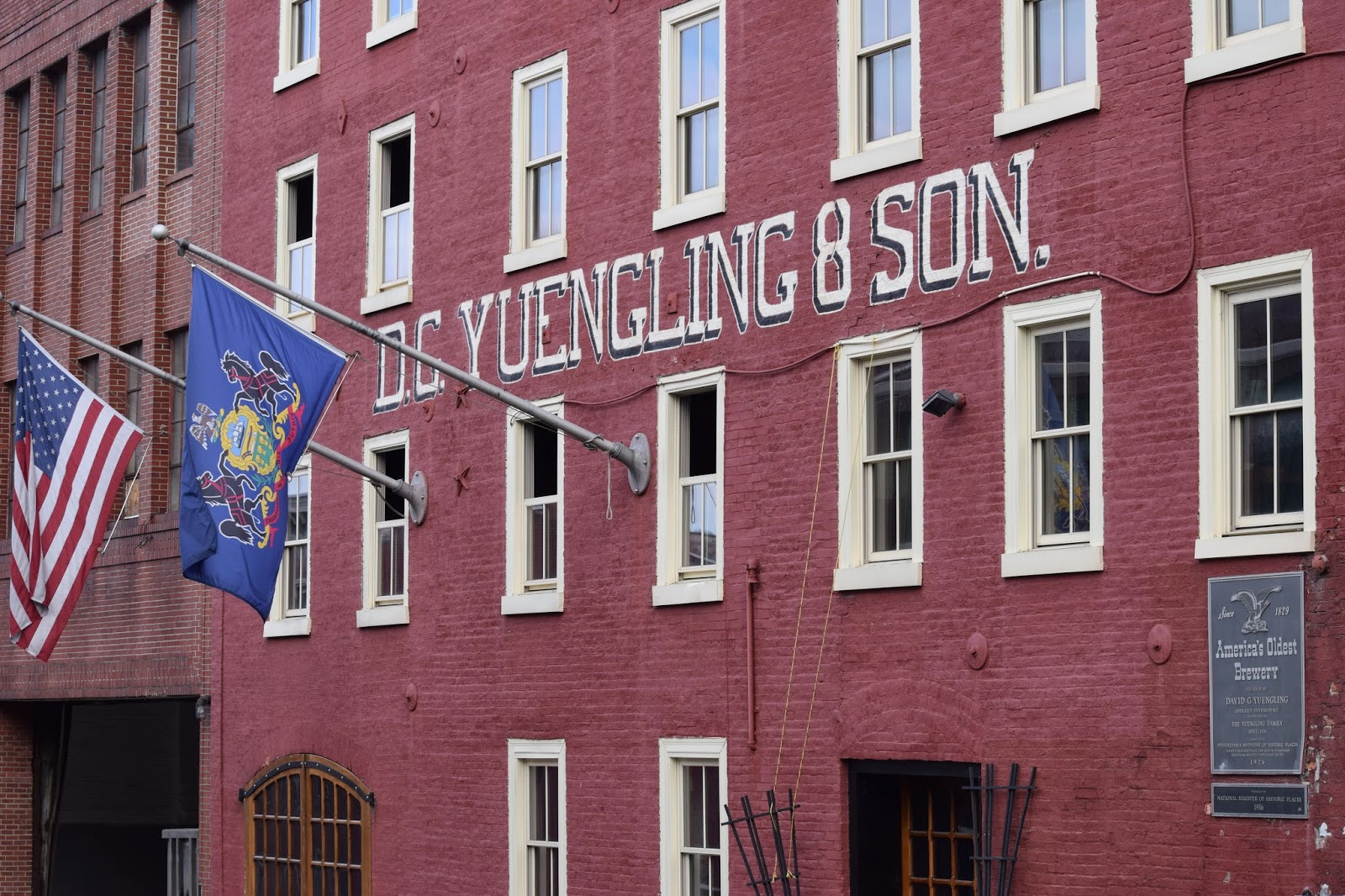 OK, no big surprise here. Yuengling Brewery has been one of the largest craft breweries in the United States for its history, which is really an impressive feat when you consider Prohibition, the Great Depression and the Second World War and its impact on the number and size of craft breweries.  For them to take a number one posting in a list of craft breweries is no mean feat.  I have readily drank their beer as a triumph of US beer brewing but I always felt that it tasted kind to weak.  Hell, it was better than Bud and cheaper too!

But times they are a changing and so has my beer preferences. As a matter of fact, I am going to make a pilgrimage to the 50 Craft Breweries over the next couple of years and I am ready to be surprised. So, it stands to reason, perhaps I need to re-evaluate our beer criteria and put Yuengling Brewery, and their assembled beers, through the ringer once again. So, it was off to Pottsville and to take another look at the number one craft brewery and its beer.

I have to say, I was amazed, but it was for the wrong reasons. On deeper reflection in the car on the way home, I came to the conclusion that Yuengling Brewery beer is macro-brewed and not relevant to the contest.  I did not want to admit when I tasted it before, but it is brewed the same way as all the other macro level breweries and thus its not the number one craft brewer in the United States. It hit me like a bolt of lightning as I was driving home and then I began it piece together a story that seems to make sense. It just dragging it heals as the last of the macro-level beers and it can not be rightly held in the craft brew ranks. It not what it seems, so let me explain.

Back in the days of Prohibition, the laws that the states passed to regulate alcohol production and consumption were pretty different from one another. Every state tried to balanace the need for a total ban with the view that they needed to have some alcohol.  When Prohibition was lifted, it was the middle of the Great Depression, followed by the Second World War. If you are to line up three major economic shift in alcohol production, those three are a big one-two-three punch. By the end of the Second World War, Budweiser, Miller, Coors, and their cohorts, has gained a certain acceptance of the need to produce alcohol at an acceptable level (could be it was military spec or a cooperative agreement) but it was never a return to the days of pre-Prohibition.

The breweries that survived Prohibition, the Great Depression and the Second World War were pretty much serving the same beer and Yuengling Brewery was in the same boat. They held on, and as one or two of their brethern pass one, they settled into a spooked life of were they going to make it or not. Iron City, out of Pittsburgh, PA led a similar existence before they crumbled. When the times seemed right and craft beer was on the rise, Yuengling Brewery made their mark, not in beer making, but in marketing and advertising. The oldest beer in the United States (at least that had made it through) was still producing mediocre beer, but had a pretty good family of products. It was not that they had the best beer, but it was that they had was the smartest beer producers.

I drove up the Pottsville and found D. G. Yuengling Brewery at 501 Mahantonco Street. The time on the door was 9:00am and 4:00pm and it was closed. The brewery is really a site to behold because it does not expand outward, but rather, it goes up, so the top levels of the brewery sit 150 feet above the lower levels.

I stopped at a place called The Wooden Keg Tavern because they advertised that they had a full run of Yuengling beer. I had had several of the Yuengling's before, so I started with the Lord Chesterfield Ale.  It was reminiscent of an light ale, both in color and in taste, with its gut removed. It tasted as if it had not been updated in 30 years.  In looking back on it, it should not have surprised me because the ale was so light as to make it largely non-existent.

I also ordered a Bock Beer and it was only mildly better. The disappointing thing with this one was that it had the color of a bock beer, but vacuumed out the flavor. Both beers really had a nice color, but they both fell down when it came to their taste. I gave each three and three and a half stars to be charitable, but that had a lot of play in those two scores.

It hit me later that people will believe that I am going to talk down these beers because I have had a revelation. But if they will sample these beers themselves, I think that they would also come to the same conclusion. Once we held these beers up and wondered why the Europeans shot them down as being comical. But the Europeans don't do that anymore. Now I wonder why we would not hold Yuengling Brewery up at all, because there are much better beers available in the United States.

It was a long drive home, bouncing all of these facts in my head. The number one craft brewery was a fallacy and was actually a hold over from a time long past when breweries were doing anything just to hang on. I was going to have to factor that into my calculations that Yuengling Brewery was not a up and comer as much as it was a survivor.
Posted by Brian Smith at 1:31:00 AM