Czech to German by way of Austria and Brooklyn

Last week we looked at the original, Pilsner Urquell,  our baseline for Czech pilsners. Now we will look at the German style of pilsner, though truth be told our first candidate is actually from Vorchdorf, Austria. The finer points in the various styles of pilsner are going to wait till this Friday when I write a more comprehensive overview of the pilsner style and it's impacts on modern brewing. Let's get to the beer! 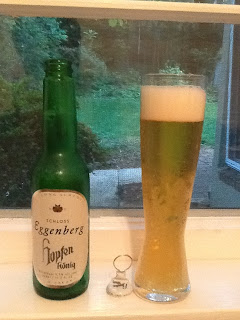 Our first candidate is Schloss Eggenberg Hopfenkönig. We have all the pilsner characteristics here, the golden color, high carbonation, crystal clear appearance, the white fluffy head, and lacing down the side of the glass.

This had less bite than expected and while there is some bitterness in the aftertaste it is mixed with a some biscuitiness.  While light on the palette and refreshing, the hop effect is muted and that takes away from the crispness. Truth be told this is not actually a good representation of the German Pilsner style despite what the bottle says. It has more in common with its Czech counterparts to the north. It comes in at a drinkable 5.1% ABV. This is a decent beer for someone getting into the style but you will want to move on to others soon.
Here is the “party line” on Hopfenkönig: 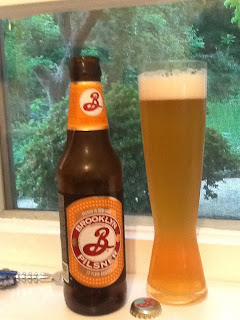 Our other candidate tonight is an American attempt at the German style, Brooklyn Brewery's Brooklyn Pilsner.

A nice floral nose on the pour, setting up with a darker golden color and crystal clear appearance with the requisite fluffy white head.  It has a crisp bite, and a bolder hop character up front, but it does not have much of a lingering bitter aftertaste. This is more in line with the German style of pilsners with an earthy taste to it.  It is a refreshing beer with a bit more body than expected. It comes in at a drinkable 5.1% ABV. I would say that it is worth enjoying a few on a nice summer afternoon. It would do well at summer picnics and with food on the grill.

Here is the “party line” on Brooklyn Pilsner.

Brooklyn Pilsner is a refreshing golden lager beer, brewed in the style favored by New York’s pre-prohibition brewers. In the 1840’s, the pilsner style emerged from central Europe to become the world’s most popular style of beer. Like its ancestors, Brooklyn Pilsner is traditionally brewed from the finest German two-row barley malts. Germangrown Perle and Hallertauer hops provide a crisp, snappy bitterness and fresh, floral aroma. The flavor of the malt comes through in the finish. We ferment Brooklyn Pilsner at cool temperatures, and then give it a long, gentle maturation (lagering), which results in a beer of superior complexity and smoothness. We believe that you will find there to be none finer. Unlike mass-marketed so-called pilsners, Brooklyn Pilsner does not contain cheap fillers such as corn or rice, nor does it contain any preservatives or stabilizers. Brooklyn Pilsner is the real thing.