All Aboard for Uppsala!

I love to travel. I admit it, I have the travel bug. To get out, take in all that the world has to offer - the good, the bad, the ugly - I just absorb it, feeling relieved, satisfied and rejuvenated. Man, it just feels good and you are ready to take on the world and that is where I was, drinking it all in. And before you ask, it was a total of three trips - one in the US, one to Sweden and one to France. Each different, with a different goal and delivered in a different way and we are going to take them each in their own way.  But we are not going to take them in order, that would be predictable, so we are going to start with Sweden.

Sweden holds a special place for me. Its an ancestral homeland (one among many), the birthplace of my ex-wife Kristina, its the birthplace of my eldest son, Oscar, and its country of my youngest son's citizenship. (Hello, Marcus!) I spent two years trapsing around the Swedish countryside, seeing all that it and its neighbors (Norway, Denmark, Finland, and by extension, Iceland) have to offer. Its like a second home, though I can't say I have ever mastered the language!

In preparing for the trip, I did a little research to prepare for the adventure. I figured with a population of young, boisterous college students, Uppsala would be host to a few really good craft breweries.  I may even have a shot at interviewing one of the brewers.  I was ready!

When I got there, Kristina suggested that I should hit Systembolegat. Systembolegat (also known as Systemic) is the one and only national liquor store. The grocery stores has Level I and Level II beer, but if you want to have some really good wine, distilled spirits or beer, you have to go to Systemic. So, it was off to the store early in the trip with Oscar and we picked out a few bottles that we felt represented the breadth of Swedish brewing or were just fun on appearance. One even came in a plastic bottle, so I knew we were ready for anything.

After a week of taking Oscar and Marcus around to their activities, (they should have listed a prescribed alcohol intake level, but such was not the case) I was ready to engage the targets of my research.

First on the list was Pistonhead Kustom Lager, produced by Brutal Brewing (4.9% ABV and 33 IBU). It was the initial brew to be tested and it fit the Swedish model. Slightly better than average, but only in the hops used. Mariestad Export by Spendrup Brewing (5.3% ABV) was up next and it lived up to expectation - absolutely nothing. They used to advertise this beer as the spirit of summer but really is horrible fizzy water with a mild taste.

The next evening, though, was a positive turn. My brother in law had read my initial reviews and had suggested I try beers by the Nils Oscar Brewery, notably the Hop Yard and the Belgo Pale Ale. Kristina had read the article too and had gone to Systemic earlier in the day and we split them both. Hop Yard (7.3% ABV) and Belgo Pale Ale (4.4%) rescued a faltering Swedish beer entry. The Hop Yard was a good, solid improvement in the area of hops with lots of flavor.  A good sign was that Kristina liked it, as she is very good on hoppy beer. It reminded her of Dogfish Head 60 Minute and I would say that would be right. The Belgo Pale Ale was more to my speed, less hops, and more carefully brewed taste. The last one we tried that night was a Pistonhead Flat Tire (4.5% ABV, 26 IBU) and that one proved again that the pretty cans (Pistonhead does have nice cans - no pun intended) contain really mediocre beer.

Sunday afternoon and evening were pretty busy.  Dinner with friends is always a big production in Sweden, though the Swedes take it in stride. One the beer menu, I had listed Dead Pony Pale Ale by BrewDog (3.8% ABV and 25 IBU). I know that beer in the can is supposed to be better than beer in the bottle and Dead Pony Pale Ale proved this in spades. It is BETTER, but when compared to the average beer, but not to good beer. The real star here was Nebuchadnezzar by Omnipollo (8.5% ABV and 100 IBU).  This beer just knocked you off of your feet - good brewing and a strong flavor - and asked for more. It was probably the strongest beer I tried all week. The title of this beer is not apparent for someone looking for it - it is hidden on the backside with the ingredients - and the front is a reminiscent flag.

Monday was one of those days that you expect will go one way and end up going completely the other way. I though I would be able to go to the craft breweries, but that just was not in the cards for that day or any day for that matter. When your bank is trying to retrieve its card and does so rather unexpectedly, it kind puts a crimp in your spending habits, and that is what happened to me. So I needed to reassess my purchasing power and the way I spent my money.  However, I still had several bottles and a can of beer and so it was not a total loss. I had a Bombol Bee 17 by Carlsberg Sverige (4.7% ABV and 33 IBU) which turned out to be an excellent beer. Normally Carlsberg Sverige are kind of flat, but this Bombol Bee 17 was really good.  It was also served in a plastic bottle, the only one I encountered, ad I assume it was for serving at a stadium. The Carlsberg Sverige brewery returned to form with the next beer, Carnegie Porter (5.5%) (5.5% ABV and 40 IBU) which was sort of flat and lacking in flavor. It was interesting that this one was in a glass bottle and it suffered from the ills that impact all of the other glass bottled fair, but not the plastic bottle. Got to be something with their machines.  The last one for the evening was the Kung by Abro Bryggeri (5.2% ABV). I knew this one was going to be bad, oh so bad, but I did not realize how bad it really was. It scored one and one half stars and that was being charitable, but it is a big seller, mostly because it is 5.2% ABV and that is plenty to get a lot of people a little bit tipsy.

Finally, its Tuesday, I am going to go out and discover the Uppsala craft beer scene - lots of producers and lots of places serving up unique and intriguing servings. I would take the craft breweries, absorb what they had to offer and then I would venture to the restaurants and those places specializing serving the craft breweries. So out comes the iPhone and I pull up the map showing the all the places serving craft beer. My heart begins to flutter and then ... one.  Uppsala has a lot of things that a university town has - including the university - but it does not have a large craft brewery industry. It has one. One. So, I look up restaurants - it has five. OK, its not strong, but hey, five is better than none, so I plan to go to the one craft brewery and the five restaurants and that should cover me. I am off for what turns out to be a short trip.

I started out searching for craft breweries and my sole target was Slottkallens, Slottkallens is well established and has been around for a while according to my sister-in-law, Helene.  It was not an inviting place, simply because of where it is located. As a matter of fact, I missed it the first time I set out looking for it. It is the one food/beverage ventures that is wedged among several auto body shops.  It also did not have a tasting area or a craft brewing room that I could see. With my time limited, I decided to find some of the restaurants, but they also were few and far between over in the center of town. With about an hour to do everything, you can imagine how much I got done, so I returned with some great pictures, but nothing more. 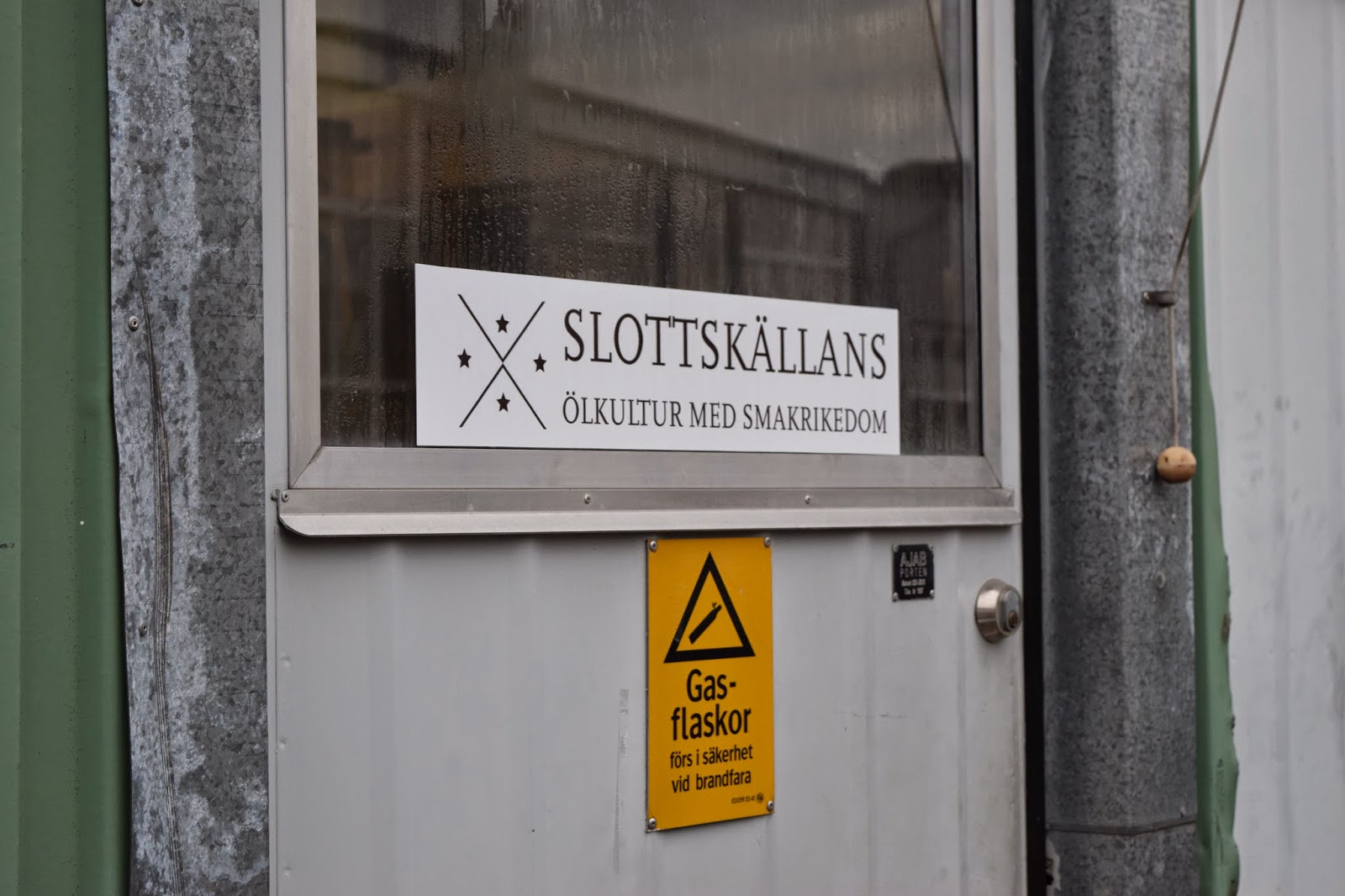 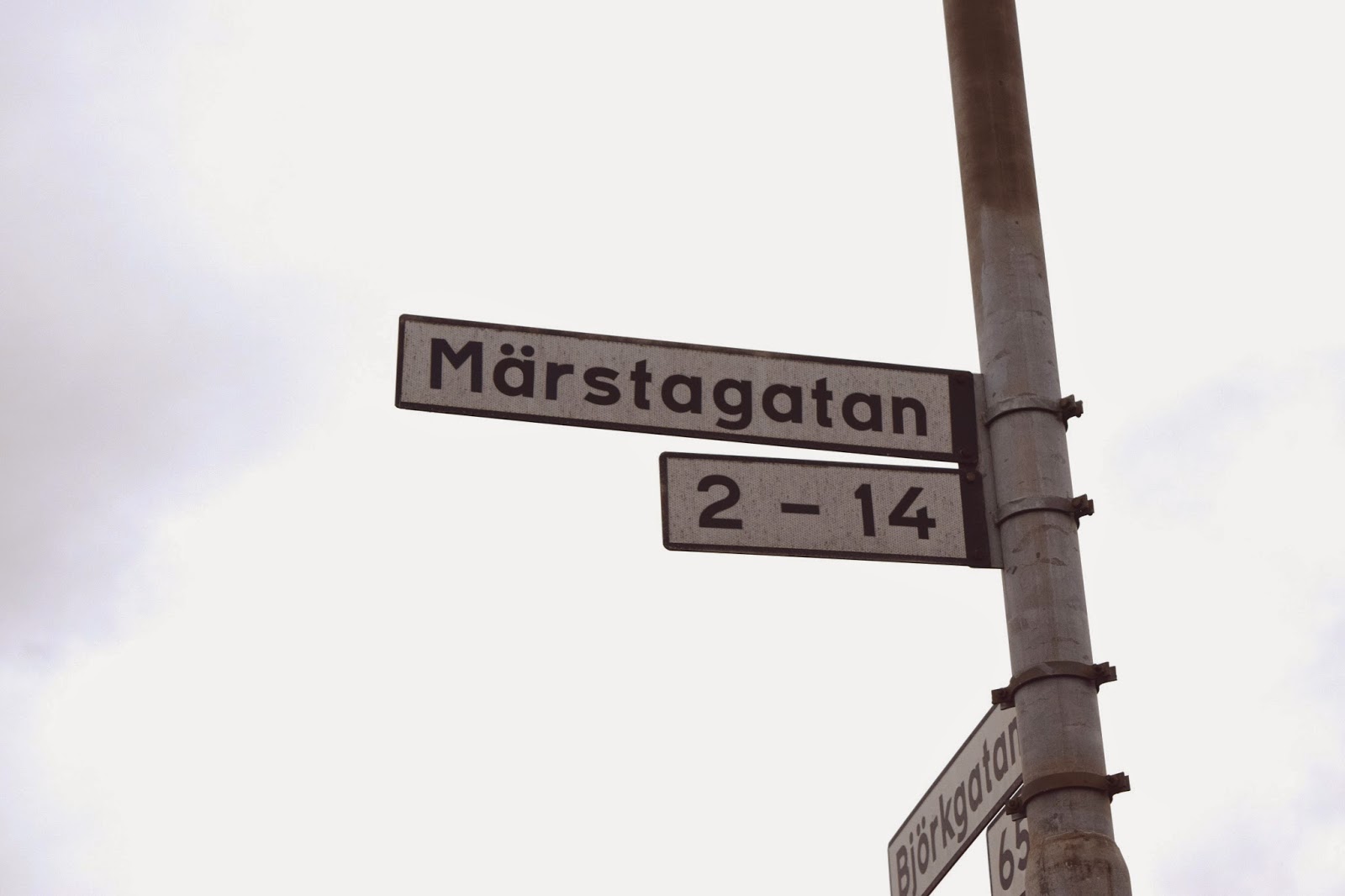 By the time I arrived home, we had about an hour and a half before the next dinner party, so I made a little time for a Kaltenberg Organic by Konig Ludwig Schlossbrauerei Kaltenberg (4.7% ABV). This was an impressive beer, both because it was an organic and because it was a new brew. Four and a half stars and it was worth every one of them.  This must have been the night for impressive beers because next came the Orange Crush by Amager Bryghus (5% ABV). This was done in cooperation with ç in the US and it had a really interesting taste of oranges. Subtle, this just slips the taste of oranges everywhere, but it does so without being too obvious. We even got a a note from the brewer, which is not that frequent.

The last night for sampling beers was a kind of a let down because Kristina was not there, but I had plenty of help in the form of our two boys. The first sample of beer was a Rokporter by Nils Oscar (5.9% ABV) and it earned a smokey flavored four and a half stars.  It was smooth and thick, but not so much that it interfered with drinking. The two that followed it were kind of disappointing. The first was a Thurbo Stout by Oppigards Bryggeri  (8.7% ABV) which started off well but quickly tailed off. I thought it was me, as I often have problems with even dark beers after a smokey porter, but I could not stop it. The last beer was a Sam Adams Black Lager (4.9% ABV). Now black lagers as I have learned are more black by color than by definiton, so I had hoped that would counter the porter, but it had the opposite effect. The porter pointed to the weaknesses of the black lager rather than the strengths of the porter. I gave both three stars, but the the black lager's three stars are more charitable. (I normally give Sam Adams a higher numbers of stars, but not this time.)

So there you have it, my drinking adventures in Uppsala. Next time, I may do a couple of days in Stockholm to compare to two experiences, but Systemic gave me a good experience of what drinking beer in Sweden is like. It certainly varies with the beer and the breweries.
Posted by Brian Smith at 10:55:00 PM