Getting Out of Town: Redbeard Brewing Company in Staunton

Talking. Conversation. Having never been to a place yet saying to yourself, “wow, is that where that is.” For all of the hours we while away digitally searching for that one perfect spot, talking can often narrow it down in an instant. Talking is how I found not one, but two, spots for me to relax on a Saturday afternoon. Talking is how I founded my spots for the weekend. 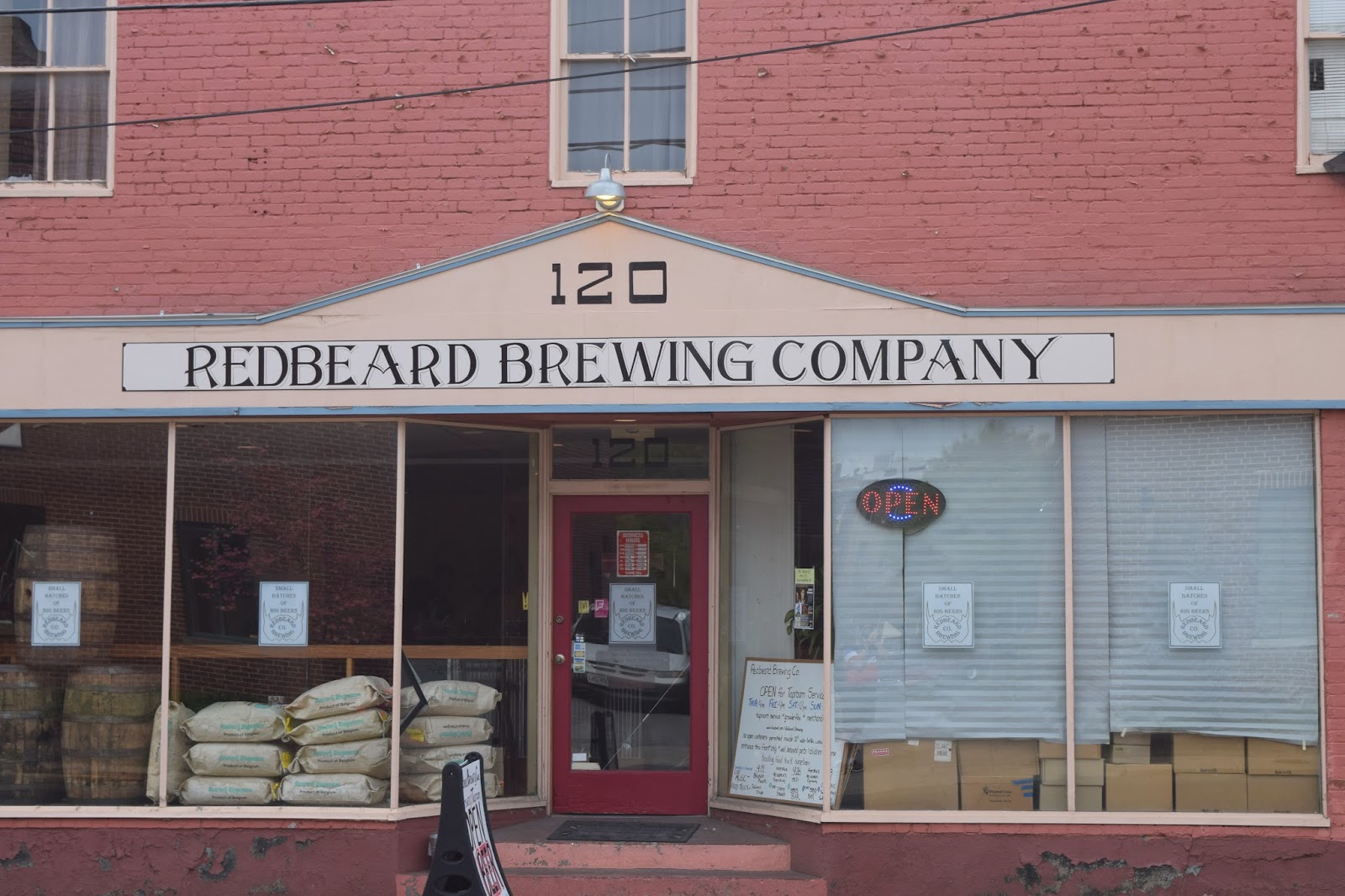 The destination is the Redbeard Brewing Company in Staunton, VA. Now, a little background. While I don’t have a regular spot for writing, sometimes I do frequent a couple of place more than others. Peets, out of on Monument Drive in Fairfax, is one of those places. I could go on about  Peets, but it is the connection to Berkeley that really sets is apart. The photo is the upper right corner of the collage on the wall says it all.  So, there I am writing away and I spot a San Francisco Giants jersey on a guy, a little older than me. He sees that I have spotted it, we make conversation and I discover that he is also an Oakland Raiders fan and East Bay follower as well. This is getting good and though we don’t hit on all cylinders, I find out that he is moved back here with his wife and they are into skydiving. He asks if I have been to Staunton (pronounced Stanton for all of you non-local folks) and I say that I have not. He then fills me in on the Redbeard Brewing Company and on some of their brews. I am intrigued and make notes of it (yes, I am learning to make notes) and agree that I am going to make an effort to go there. 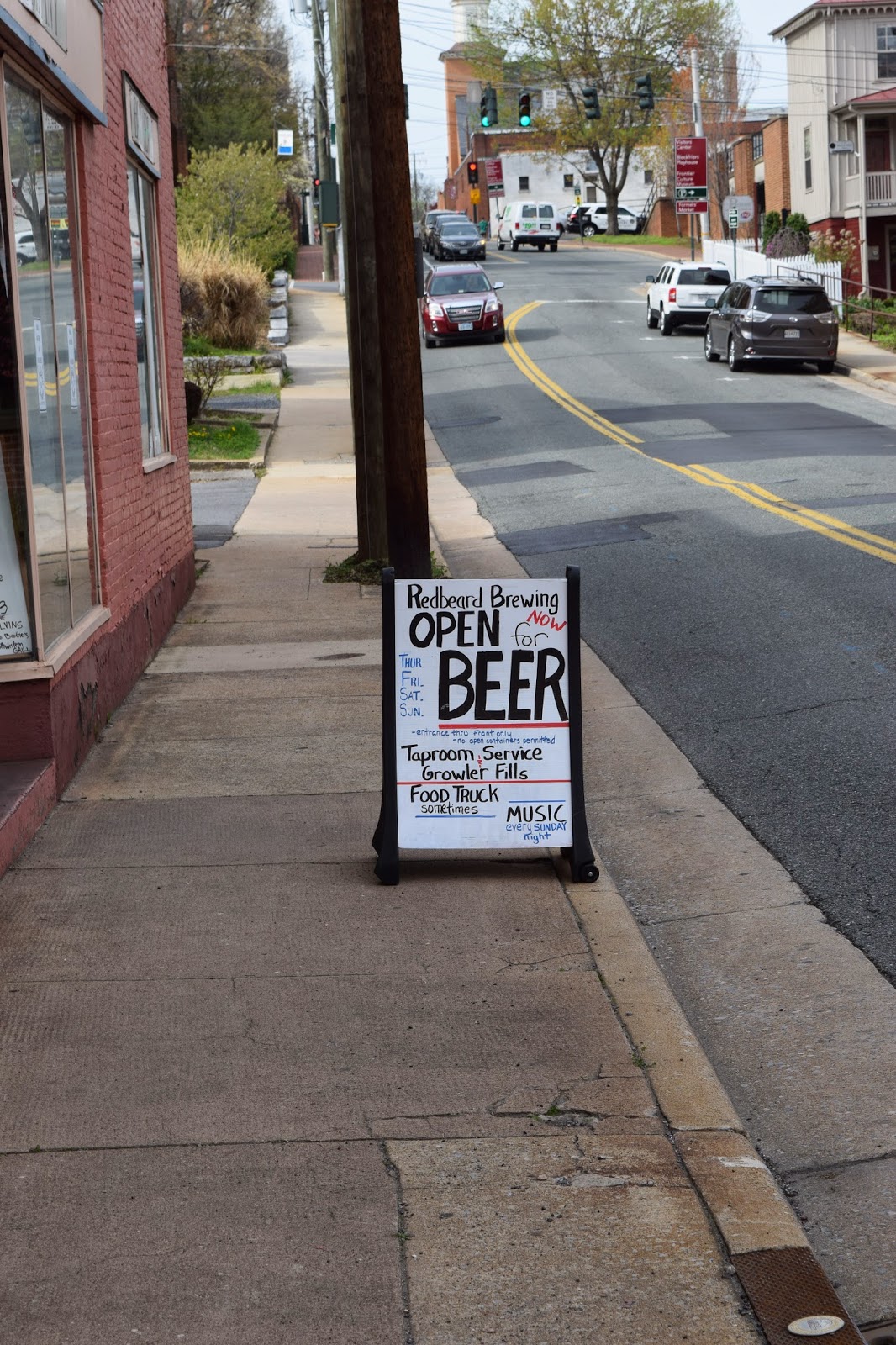 So, Saturday comes, my calendar is empty, and I am off to Staunton. The drive is about 2 1/4 hours and the town is cool. Really cool. Its an old industrial town and it has kept its original plan. The buildings are original and their are few, if any, new ones. If you have a couple of hours, it is well worth the drive down there. After doing a little prairie dogging, I found the brewery off of the main drag. (You will find it too, its not very big and its next to the place that does it own glass blowing - really nice glass blowing.)

Redbeard Brewing Company is in an original department store building and is slowly being torn down on the inside and replaced by a modern facade. It is best described as “under construction” by it will be nice and clean when it is finished. When I walked in, there was not much of a crowd, but the barkeep assured me this was not the case - it was their first nice day in a couple of weeks.  So, now it was on with the choice. I picked out a sampling of beverages from the six that they had, put it into 4 oz. glasses and proceeded to sample. Now, I have gone back to get accurate information on the sample sizes, only to find out that they vary their holdings. For some, I am able to get sample information, and others I am not.

America’s Pale Ale: Light in terms of taste, with a bit of hop. Still not much there. It was perfect for a warm afternoon like this one. Again, beer is what you make of it. 4 out of 5 stars.

American Brown Ale: This had more punch than the pale ale, but not a whole lot. It actually a little weak, but it does hold its own. Could stand a few more hops, but all in all, its good. 4 out of 5 stars.


Session IPA (4.25% ABV 55 IBU): Weakest of the three so far. It carries the flavor of a Session, but not of an IPA. However, gives a good account of itself. A little more time and then we will have something. 4 out of 5 stars.

Blueberry Wheat Ale: Blueberries by the snoutful. Light, but a pronounced set of blueberries. The beer is consistently light, perhaps a little too light. Otherwise, its good. 4 1/2 out of 5 stars.


AMOG Stout: Smokey foretaste based on the smell. Kind of a mix between coffee and beer, but it doesn’t quite work. The brewer is onto something though and should keep trying - he/she is onto something and should not let it go. The two flavors are separated now and they should be one in the future. 3 1/2 of out 5 stars.


Black Rye IPA: Where the last one needs some work, this one is alive! Wow! its a mix of hoppy and a smooth base which make a nice mixtures. It is really much more than a few Black IPA, it is really special. 4 1/2 out of 5 stars.

The venture to Redbeard Brewing Company really turned out well. The place is nice and quiet and moving forward without being forecast as dead. Staunton is a wonderful little town, but it is kind of on the downside. Walk around and the real estate market simply tell the story: houses for sale, buildings shuttered, places closed up. It is one of the places that our economic turn around has missed but Redbeard Brewing Company is turning that around, slowly but surely.

But wait, didn’t I say that there were two places in Staunton, not one? Yep, I did, and the next one will be in the next review.
Posted by Brian Smith at 11:17:00 PM