Drinks of the Week!

Sorry for the delay in updating this section, but as you might have guess, I have had a major time partying to my 1,000th drink. Yep, I made it and it felt so good that I have started on a the next thousand! Hey, once you have it down, it should be pretty easy, right?

So, the next thousand (sorry, I am stuck on this business of a thousand, but eventually it will pipe down) starts at 1,016 because I have had a few bottles in between. Hey, it goes with the territory and I will cover some of those drinks as a group a little bit later.

The next group of five ends our experience with the Hispanic markets and casts us squarely back amongst the North Americans. The Hispanic voyage really portrayed what US beer markets used to be. Aside from a few (very few) brands, the Hispanic brands that are imported to the US represent the US market 10 or 15 years ago. This is not to say this is the case now, but what they are importing is saying a lot about how they view the US market.  They were a lot of what we used to be about and the newer US market is a lot more about where we are going. I like the direction of where the US headed and I believe that we have Providence on our side. Its certainly where we are going with four of the five brands we have in our review.

(Suffice it to say that the Budweiser ads in the Super Bowl XLIX last week did nothing to cement the relationship that InBev is carving our with the American public. It is very interesting to have a Belgian multinational (I believe) try to execute a strategy the same way that American multinationals have executed a strategy on other audiences. Turn around is fair play except that the Belgians are promoting a fear rather than a pride in supporting their beer.  But more on that later!)

Now the five from last week. I am going to trying to move these into the write-up and we will see how it goes. You tell me if you like it or not.

Biera Corsa - Pietra: Kind of a peppy start, but then dies away. Like an IPA, but smoother and more easily distinguishable. Richer taste too. Pretty good. 3.5 stars.

Rince Cochon - Biere Blonde Des Flandres: It has the smell of smoke in it, but doesn't work for me. the tap taste if good, and I know what they are after, but they just keep missing it. 3.5 stars.

Rince Cochon - Biere Rouge: The sweet syrupy sauce is a pleasure to taste, but it sits separate from the beer. It's two drinks where they should be one. Not great. Yes, that is a nice pig! 3.5 stars.

Brassuers Depuis - Jenlains Ambree: This beer has a kind of melancholy taste to it. It came out of the bottle nicely, it looks good, but the taste is kind of flat. Oh well...3 stars.

Brasserie Dubuisson Freres - Denee Des Trolls (Belgian): #1000! I have finally made it! Woohoo! and the beer: Smells like cookies. Says that it is a Belgian strong ale, but they would be lying. 3 stars.

OK, here are the five for this week:

Cerveceria Modeleo Mexico - Victoria: The last of the Hispanic beers and one that I imagine will continue to the trend to 10-15 year old US beer. I would really like to see the Hispanics break out of this trend and try so more exotic beers. I know they can do it.

The Ilkley Brewer - Siberia Rhubarb Saison: Rhubarb says it all. Normally rhubarb is combined with strawberry because the flavors really go good together. Strawberry for the sweetness and rhubarb for the tart. Rhubarb by its self should be lovely in its tartness.  We will see!

South Street Brewery - Anastasia's Chocolate Fantasy: This could be good - big bottle of chocolate goodness. It could also be too much of a good thing because chocolate is fine in the right proportion but simply too much when it is overdone.

The Dogfather Imperial Stout - Well, leave it to me to take a picture of a bottle but not the brewer! I was so enamoured with the name (and who wouldn't be) we will have to take it on faith of the quality of the brew. But it looks reasonable and it is another example of the breakthrough of the American brewing tradition. 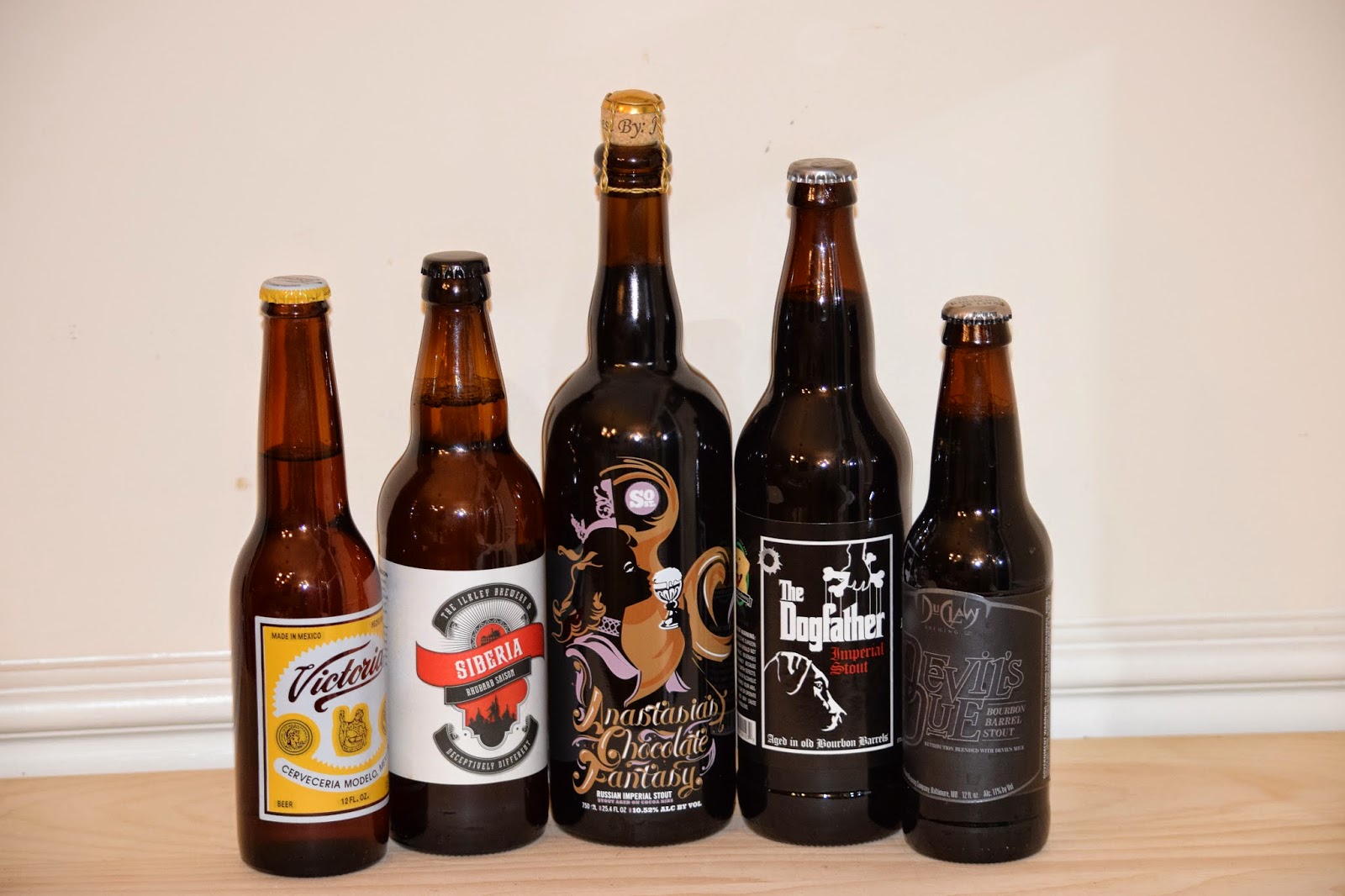