Well, I got through last week unscathed, mostly because the beer was remarkably average. The ones that we imported from Latin America, are surprisingly because they are much like our own tradition beer used to be, rather than where it is going.  American beer covers such a range of taste and flavor that we can't really put it into a nice little corner. It is so diverse and robust, it has really broken out of it mold and has begun to take the stage.

So we tried beer from Argentina, Guatemala, Honduras and Bolivia. Now lets try it from another direction - France. Now before I get messages about going to Gaul, let me explain myself. Bear with me, and hopefully, you will see it in the end.

When I went to France this fall, I reconnected with with a friend who had really meant a lot to me.  I lost touch with this person except for birthday messages and the occasionally rare exchanges. I was as surprised as anyone when she said that I should definitely make plans to come and visit her and her family when I finished my visit to Sweden. Her message was bright and sunny, more than I had warranted.  I mean, if you had known me before, I was a real idiot for having left her and she let me know it. So off I went, nervous, and excited, but happy that that we would be friends again. We hit it off, two peas in a pod. I don't know where it will go and how it will play out, but I do know that I am happy that I did it.

So, these bottles and cans are not just a representation of France, they are a representation of her and what she has meant to me. For that, these are the tastes I am saving as I close in on 1,000.  A small token of the time we spent together. So here they are:

Biera Corsa - Pietra: This one is the real mystery of the bunch. Teach me to study German and Swedish because this one is totally unknown. The only way is to open it and find out!

Rince Cochon - Biere Blonde Des Flandres: This one is a little more knowable - its a blond of the field of Flanders, so it is a light and rich in color and fairly complex. I will see if it lives to up to it.

Brasserie Dubuisson Freres - Denee Des Trolls (Belgian): This one turned out to be Belgian after I bought it and I think I may save it for the last one. Blond ale taste along with fruity aromas, it could be the sweet one I have been looking for.

Rince Cochon - Biere Rouge: We could be in for a good one here. The pink bottle seems to indicate a raspberry or a cherry flavored content, but we will not know until we try!

Brassuers Depuis - Jenlains Ambree: The amber note on the outside leads me to believe that this one is a little more flavor than the others, but again I will know when I have tasted it. 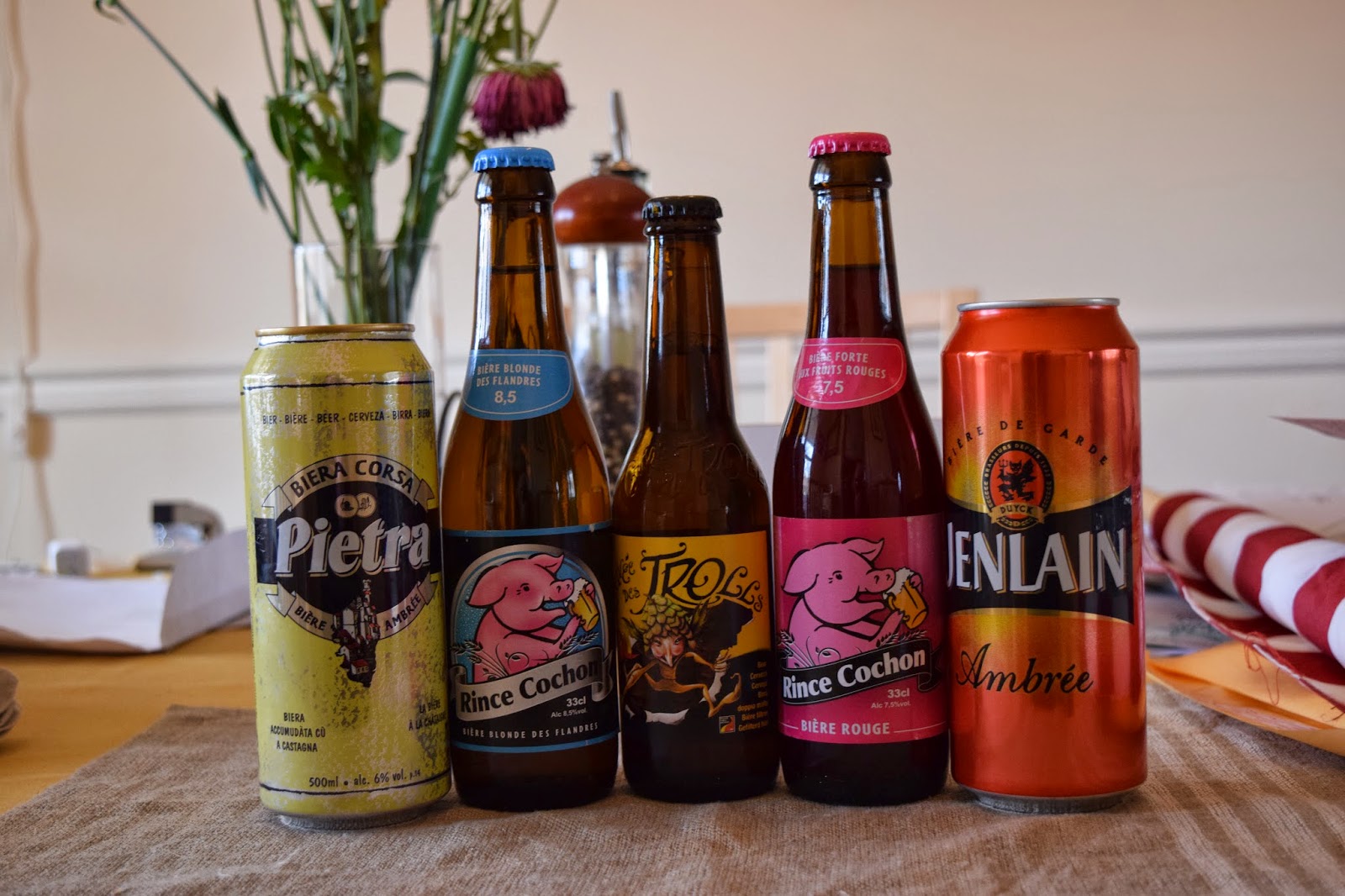