Skye here, publishing this for our resident chef, Rudy

Rudy: In honor of February as stout beer month I selected three stouts that I had not drank before. I must admit that I have never been a true die hard stout drinker, not that I dislike stout beers, but I feel they are sometimes a little unbalanced and heavy. To clarify, I think when dealing with heavy beers and flavor it can be hard to find a balance. However, this time I was very pleased with my selections and was very surprised to find balance and taste. I did not experience the usual cotton mouth that sometimes follows darker beers. I tried them cold and at room temperature and found them very pleasant at both. The flavors tended to appear bolder as they warmed and breathed.  As a chef whenever I try new beers, one of the first things I think of is, “What style of food would this beer best be served with?” In general, I tend to steer toward the meats, then chicken, then seafood and finally dessert. Any of the three reviewed would do well with grilled meats or steamed mussels and clams. If served with chicken make sure you have a hearty herb marinade, made up with earthy flavors such as Thyme, Rosemary, and Sage to support the richer flavors of these beers. After the jump I have attached a recipe originally found in Beer Advocate magazine for “Ginger Porter Snaps” that would be great with any of these beers. I know it calls for porter beer, but the complexity of these beers would marry well with the ginger and the chocolate malt.

This Stout was the first I tried and at first it was meek and bland, but as it warmed up it had a nice drinkable flow to it. I would strongly suggest it at around room temperature.

A true stout, strong and bold with flavors that pop from the get go; warm or cold there is no mistake you are drinking a stout. A great drinking beer that entices you to consume way too many….

Lighter than Bells and heavier that the Louie, this was my favorite of the three, easy to drink. A stout that had full range of flavors and just the right amount of heaviness to let you know this is no pushover. I already had the second beer cracked and warming by the time I had taken the second sip, er gulp of my beer. This beer is a winner for me and would be great with grilled meats, wild or domestic, seafood or as a dessert beverage. I warn you now; you might want to save at least one for the morning…for a little “hair of the dog” as they say. 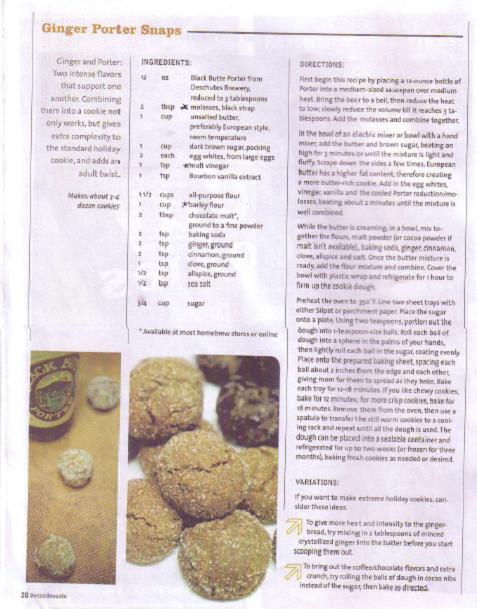