OK, skiing is not my thing.  Putting sticks on my feet in a water environment is just a recipe for disaster (or comic relief if you find yourself standing on the sidelines enjoying the comedy of errors.)  Downhill, cross-country or even water-skis – it’s just not my thing.
Now my wife is a winter sport natural and thankfully our boys have gotten her “snow” genes.  As a result, I find myself travelling with the wife and boys to our local ski resort, located in the Pennsylvania hills, a few times each winter, cultivating their skiing and snowboarding resumes.
On a recent Sunday morning trek up the mountain, we decided to try a new tact.  While my wife took the boys to snowboard and meet up with other winter skilled Scandinavians, I headed off into the local countryside in search of a local brewery in Chambersburg, PA.
The journey started easily enough, iPhone in its cradle, Google maps up to navigate, I set out .  The rolling hills and country roads made for pleasant and exciting driving.  Chambersburg appeared soon enough.  Lots of people were coming out of their local churches, creating a bit of traffic on the street grid.
Following the directions, I found that I had passed my location.  Worked my way back and tried it again.  And again.  And, yet again.  After discovering that the aforementioned street grid includes a number of non-grid like alleys and less than well marked streets, I found the Roy Pitz Brewery.  Like the sign said, “its just around the back.” Then the next sign also rang true – “closed.”  Yep, it was Sunday, this was Pennsylvania and Blue Laws are still on the books.
Undaunted, and having plenty of skiing time on my hands, I went to the next establishment on my list.  The Appalachian Brewing Company in Gettysburg (yes, that Gettysburg) was just a short drive.  The brewpub is just on the edge of the battlefield park and offered a pleasantly rustic atmosphere with an eager and young wait staff.  They had a nice selection of beers, presumably brewed on premises, but possibly in the main brewery in Harrisburg, PA.
I ordered up a fish and chips plate and a Water Gap Wheat, an American style wheat beer.  After the energy expended in finding the Roy Pitz brewery and pressing the time to get to Appalachian Brewing Company and back to the ski resort, the experience was a bit underwhelming.  The Water Gap Wheat couldn’t really make up its mind – did it want to be a wheat beer or not.  It lacked the distinctive body and taste of a traditional wheat beer and even though it was an “American wheat” which was supposed to be lighter in texture than its traditional namesake.  Poor head, lacking in aroma or a consistency of flavor, the beer wasn’t worth the adventure.  (The adventure was worth it on its own.) The link to the Water Gap Wheat is to its listing on Beer Advocate and their opinions differ, but I'll stand by my assessment until I get a chance to try it again. 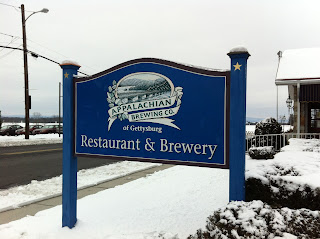 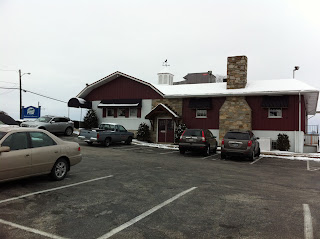 Photo:  B Smith
Racing back after lunch to the ski resort, I made it on the dot, but resolved that I needed to push back to Roy Pitz the next time we took the snow monkeys to the slopes.
In part 2, we’ll explore the return to Chambersburg.
Posted by Brian Smith at 11:58:00 PM