From Delaware to California! We take a closer look at East and West Coast spring seasonals

It's Pi Day, a day to celebrate a never ending number which is sort of how I feel when I go to the beer store. So much selection and it grows everyday except it seems for the spring seasonals. Don't get me wrong, they are out there and you can find them, but they aren't as celebrated as the potent winter warmers, autumnal harvest ales or refreshing summer beers.


This week though we are going to look at two of them, both brewed with a fruit component, but very different from each other. 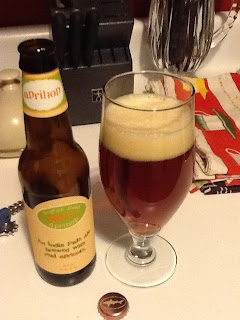 Up first is Dogfish Head Aprihop. I have had this before but it has been several years since I last tried it. Memory can play tricks so I felt it was time for another go.


The ale poured a clear amber color with a white head that dissipated very quickly. Lacing clung to the side of the glass as the beer was drank. On the drink it is fairly smooth, and there is sweetness to the beer, not cloying, but fairly crisp. There is a lingering bitterness in the aftertaste. That said, this beer wouldn't be one for an above average temp spring day. Instead this one works better for an April shower. It is hearty enough to be good company on a gray overcast day.


One word of caution. If you come looking for a fruit beer you are going to leave disappointed. A better way to view this beer is as one that is enhanced by the apricot. The apricot flavor itself is subtle and I would argue slightly lost in the hops, I found the apricot flavor most evident in the tail end of the aftertaste and as the beer warmed to room temperature.


This beer comes in at 7% ABV but the alcohol is not very apparent, the hops and the apricot do a decent job of masking it. I drank the beer cool, not cold, and it was a decent experience, but I think to get a better apricot experience from it you may wish to let it warm up a bit more. In the end part of me wanted a bit more apricot out of this and it occurred to me as I drank the beer that that was the same thought I had years before. I would recommend this to IPA folks that want to change it up a little bit or as a gate way into the IPA world.


Our second beer of the night is from Buffalo Bill's Brewery Orange Blossom Cream Ale. From the start this is almost the complete opposite of the Aprihop. 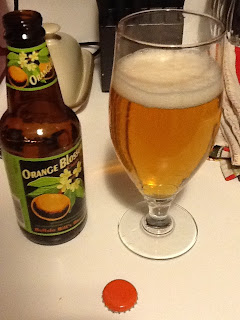 You can smell the orange in this one, it has a great smell as you pour it in the glass. This poured a clear golden color with a white head the dissipated very quickly. It drank very smooth, slightly sweet, with some carbonation and  little aftertaste, what did remain was a pleasant orangeness. Not much hoppiness or body to it either. The alcohol is in there but it is not apparent.


I'd argue that this particular beer would be better suited to a hot summer day and it is better when cold. This is a beer best suited for refreshment. It is very drinkable but it doesn't do well as it warms up.


This beer comes in at 5.2% ABV but this beer is deceptive. It feels light and refreshing but after a few of them you will feel the punch. While released in the spring I think I will go out and save a few of these for summer parties and picnics.


Let's take a look at the "party lines" on these two:


"Aprihop is an American IPA brewed with Pilsner and Crystal malts. It’s massively hopped – in the continuous fashion, of course! – and the flavor is complemented by the addition of apricots.After fermentation, the beer is dry hopped with irresponsible amounts of Amarillo hops. The beer has a hoppy aroma, with the apricots playing a supporting role.The flavor is rich with late hop flavors, and its bitterness is tempered by just the right amount of malt sweetness and fruity undertones from the apricots."

Want another take on these? Go check out these fine folks at Lost in the Beer Aisle