After a long day at work, I was looking forward to tonight’s review of Ommegang’s Belgian Style Pale Ale, or as they term it, a BPA.  It did not disappoint.
Brewery Ommegang is located at 656 County Highway 33 in Cooperstown, NY (also home to the Major League Baseball Hall of Fame).  They have a relationship with the Duvel brand of Belgian ales and advertise themselves as being a Belgian ale brewery.  I think given the last two products of theirs that I have tried, they have a good handle on the Belgian ale style and its nice that they are a little closer and more competitively priced than their native counterparts. 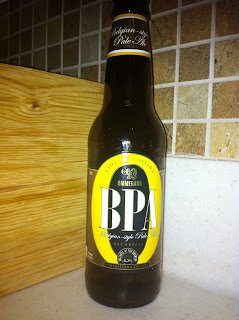 The brewery characterizes the beer this way:  “This fine pale ale offers citrus and tropical fruit aromatics coming from a well balanced – yet ample – hop character.  It is brewed with our own Belgian yeast, five malts, two hops and plenty of patience.  Finishing touches include dry hopping with Cascade hops and warm cellaring.”
I did a bottle pour taken directly from the fridge, so I was probably getting it slightly colder than the recommended serving temperature of 40F/5C.  It poured a thick, rich head that kept coming, coming and coming until it crested the glass and continued to grow.  The final pour took in the neighborhood of 15-20 minutes because of the thick rich foam.  Overall, I think I had about 10 of the listed 12 oz.
Once I was finally able to get to the liquid, I found the light citrus flavors, but I wouldn’t characterize the taste as having an “ample” hop character.  It was smooth and robust, but the hop flavor was not dominant.  It has a darker golden color, mildly turbid and not quite opaque.  It has a nice nose, but it is not particularly aromatic.  Plenty of dissolved solids, as you would expect in a wheat beer and a similar texture, but the flavor is lighter.  I could see this paired with milder flavored foods or cheeses.
Overall, the Ommegang Belgian Pale Ale (BPA) is a very good beer that I shall plan to revisit.  It has a very balanced flavor with a smooth texture and pleasant aroma.  Now if I can just get more of it into my glass…
You can follow more of my beer adventures here on Jolly Good Fellows (www.beerfellows.com), on Untappd at BSmith or on Twitter @Beeratorium.
Posted by Brian Smith at 11:27:00 PM