Our candidate for today's review is the Bruery's Autumn Maple. This particular bottle is last year's model, bought when it was first released, made a small cameo, and then stored away in the cellar. 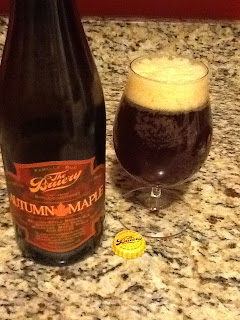 Autumn Maple poured a hazy burnt umber color with a tannish head that fizzled down quickly and a rich aroma rising up as it filled the glass. This beer immediately clues you in that it is made for the changing season.

It is rich on taste, with a small tang at the end and muted sour aftertaste with a slight bit of cloying. The yams bring a different flavor profile to it, while similar to the pumpkin it does not have the spicy dryness of that fruit. On the contrary, the flavor is more rounded and mellow. The beer has a sweetness to it, stemming from the molasses and maple syrup. Interestingly enough neither of those flavors really stand out. Instead this is an ensemble beer with each component blending and adding it's own piece to the chorus. It is a filling beer which is a compliment at this time of year. It comes in at a velveted iron gauntlet of 10% ABV. (Seriously this is a sneaky but potent beer.) If you enjoy brown ales or pumpkin beers then this is worth tracking down. Overall this is a great beer and will be the perfect accompaniment to any Thanksgiving feast. Even better pick up two, enjoy one this year and put one away for next.

Here is the "party line" on Autumn Maple:


Brewed with 17 lbs. of yams per barrel (in other words, a lot of yams!), this autumn seasonal is a different take on the “pumpkin” beer style. Brewed with cinnamon, nutmeg, allspice, vanilla, molasses, and maple syrup, and fermented with our traditional Belgian yeast strain, this bold and spicy beer is perfect on a cold autumn evening.