It's a Pumpkin Ale Doubleheader! 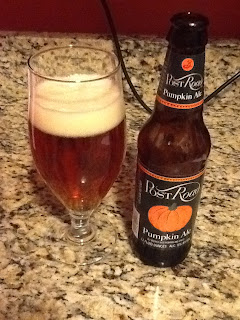 Pumpkins are a big deal in America at this time of year, you would be hard pressed to go anywhere without seeing them or some reference to them. That ubiquitous nature is what made pumpkin ale a viable entity for the colonists in the 18th century. Pumpkins offered a cheap alternative for brewers to add different flavor to their beer. This time we are going to look at two firsts. The first candidate is Post Road Pumpkin Ale by Brooklyn Brewery. This was the beer that introduced me to the joys of pumpkin ale. Ever since then I try to enjoy at least of bottle of it every year around this time. I freely admit it is a favorite of mine so this first review will be a bit biased.

It poured clear copper color with a small white head that dwindled down to a thin sheet across the top of the glass. It has a decent nose with the nutmeg standing up, waving its hands around to be noticed. It has above average carbonation and the effervescence helps promote the spices of the beer. The most notable thing about this beer is unlike other pumpkin ales this one is not going for the pumpkin pie effect but rather more raw pumpkin taste. On the drink the spices flash up front on the swallow. The pumpkin rides along throughout the whole drink, a constant companion from start to finish. Another element of this beer that differs it from the pumpkin pie crowd is that it is not very sweet. It finishes dry with only a mild hop bitterness with the spices slowly fading out. This is a pumpkin ale that can be sessioned, it comes in at a drinkable 5% ABV and it is not overwhelming with its presence.

Here is the "party line" on Post Road Pumpkin Ale: 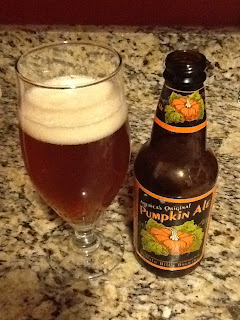 While Post Road was my first pumpkin ale, our other candidate tonight was the first publicly available pumpkin ale back when craft brewing was still in its infancy in the 1980s. Part of the story line on this beer was that it used a version of George Washington's pumpkin ale recipe. This beer may have started out as a novelty but it has hung around for almost three decades and helped usher in a thriving category of beer.


Buffalo Bill's Pumpkin Ale poured a slightly hazy dark orange color with a rapidly dissipating white head. On the drink the pumpkin pushes to the front followed by a slightly sour taste. The spices in this beer are not overt, instead hanging out on the edges flashing up for a cameo on the swallow. It finishes very dry with a quickly vanishing raw pumpkin aftertaste. That said once you start on this beer it quickly becomes an easy drinker. Each drink builds on the previous one. This beer also does not subscribe to the pumpkin pie variety but stays focused on the pumpkin itself, even more so than the Post Road. If you want a pumpkin beer with little spice presence then this is the beer to choose. It comes in at 5.5% ABV.


Right now it looks like Buffalo Bill's Brewery's website is currently under construction so here is a second opinion instead.
Posted by Unknown at 9:11:00 PM