In the home stretch! Our last two summer seasonals

It is our last week of summer seasonals and I'm going to go a bit of the beaten track for the first. My first candidate is only available in Iceland and then only in small batches though if all goes well larger batches soon. Sumarliði Hveitibjor Nr.11 is brewed by Borg Brugghús. The good brewmasters at Borg gave me this bottle when I stopped in and visited them last month in Reykjavik. 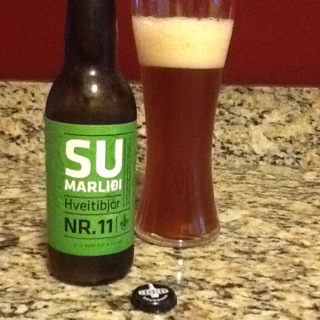 Pours darker than you would expect, a hazy golden almost amber color with some sediment settling at the bottom of the glass. It doesn't have the big banana nose like some German variants, it is more subtle. On the drink it has a nice yeasty hoppiness mixed in with some wheat and banana finishing out with little bitterness and some wheat lingering around in the aftertaste. This is a good hefeweizen and it hits all the notes, but it does have a bit of peculiarity. This is like your cousin from a different part of the country. Same family, but different point of view on things. This isn't a German hefeweizen, it is an Icelandic hefeweizen that speaks German and has some extended family living over there.
I did a sausage test on it, enjoying the beer with bratwurst and spaetzle, (ideally it would have been weisswurst but it can't always be perfect) and here the beer worked very well complimenting the spice and flavor of the meat. For this brew that is the ideal situation, to be a natural accompaniment to the grill or a picnic. I enjoyed Sumarliði a lot and only hope that eventually Borg will import to the States sooner rather than later. This comes in at an enjoyable 6.0% ABV.

Here is the party line on

"Sumarliði is the first German wheat beer produced and sold in Iceland. This prestigious and enjoyable beer style can be traced back to Bavaria, where beer like this is called Hefeweizen and enjoys immense popularity."

Want another opinion on Sumarliði, then go read a local's point of view. 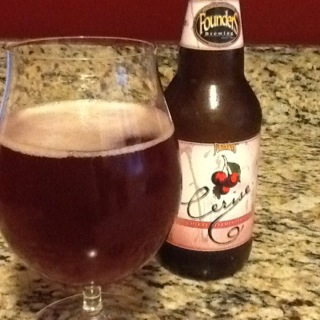 Our other candidate tonight is out of Michigan, Cerise, brewed by Founders Brewing Company.

This is delicious. Cherry, cherry, and more cherry. It poured a clear scarlet red with minimal head. On the drink you get cherry. It is has some tartness, but it is interwoven with more sweetness than you would expect. It is a rich beer, but it isn't heavy or cloying, with intense flavors up but clearing of the palette very quickly with just a hint of tart funkiness in the aftertaste. It was a very smooth drinker with decent carbonation.

This is a great example of beer as dessert. It would work amazing with cheesecake, decent with chocolate, and fine as a digestif alone. It comes in at a surprising but very well masked 6.5% ABV. If you wanted a beer to convert diehard wine drinkers to the joys of the grain then this may very well be your ticket.

Here is the "party line" on Cerise:

You’ll have a soft spot for this one. Using only fresh Michigan tart cherries, this beauty tantalizes with intense flavors combined with a no-hesitation malt bill. Adding fresh cherries at five separate stages of fermentation achieves the ultimate balance between tartness and sweetness.

We have barely scratched the surface of what is available during the summer season and for the most part stuck by traditional summers like pale wheats. There are many others sitting on the shelves waiting for you to discover them so get out there and explore! Let us know in the comments what a few of your favorite summer brews were this year.